Developmental Delay: Victoria and Mother Write Their Own Success Story Mother experienced a challenging pregnancy with early hemorrhaging, followed by numerous ultrasounds performed monthly. The air quality of their home in Mexico City was poor and parents worried about the ill effect on the baby. When it is was learned that the baby had the umbilical cord around her neck, a Caesarean delivery was scheduled. The baby’s birth cry was delayed and she was placed in an incubator at once.

“She did not pay attention to anything, she did not make eye contact or babble, she was hypersensitive to sounds and textures.”

From birth onwards, parents watched their first child develop slowly. Mother tells us, “When she was 6 months of age, we entered an early stimulation center and we shared classes with babies of the same age, and I noticed that Victoria was very behind; while the others managed to crawl, Victoria did not succeed. The months went by and every time a difference with the others was more noticeable. She did not pay attention to anything, she did not make eye contact or babble, she was hypersensitive to sounds and textures. She lived in her world, she walked on tiptoe and could not socialize with other children, she had many tantrums and no understanding whatsoever, she went from one game to another, without any period of attention.” 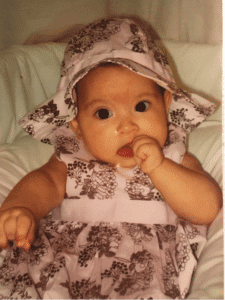 At three years of age, Victoria had an EEG that was abnormal, and parents were told it had revealed disorganization. They were advised to begin multiple therapies to help their daughter but a year later and after many therapies, Victoria’s rate of development continued too slow.

“We spent three years in language therapies and sensory therapies which never worked.”

Mother states, “We started looking for specialists. Neurologists gave us different diagnoses between generalized developmental disorder and autism. So, we spent three years in language therapies and sensory therapies which never worked.”

Soon, Victoria was diagnosed with generalized developmental delay, most especially severe in speech.

By five years of age, Victoria was still in diapers, and could not walk or run as well as other kids her age. She was sensitive to sounds and often cried when in crowds of people. She made little eye contact, and her understanding was limited to only simple things in her everyday environment. She was not skilled in using her hands, and she continued to be behind in speech – she had only two words of speech.

“The doctor told us that Victoria would not read or write, and that she would always live with immaturity.”

Mother remembers, “Every time we went to an evaluation with the neurologist he gave us the worst diagnosis. At the last time, he told us that Victoria would not read or write, and that she would always live with immaturity. He also added to her diagnosis a psychomotor disorder. It was devastating to hear those words; how easily someone can steal your dreams and hopes to see your daughter get ahead.” We were devastated they labeled our child with developmental delay.

Mother explains, “It was a really revealing course for us, since we understood exactly what our daughter had, we understood the world in which she lived, and that we could get her out of there. The brain grows by use!! And the most important thing for us was to recover that hope to get on the right track for our Little Victoria.”

After beginning the program Victoria made eye contact, began to read and to dress herself, and she started writing and speaking in sentences for the first time.

Within nine months of a good nutritional program, oxygen enrichment, reading, crawling, and creeping, the little girl had progressed dramatically. Her vision had improved, she now made eye contact, and she had begun to read her first words. She was far less sensitive to sounds and was following directions well. Her coordination and balance had significantly improved. Now she could run 100 meters nonstop. She could dress and undress herself, and she was beginning to write her first words. Best of all, her speech had exploded. She was speaking in sentences, asking and answering questions, and had become conversational. She was proving that the diagnosis of developmental delay was just a label that could be changed.

Victoria traveled independently with her gymnastics team to a national competition, where they won top medals.

Victoria, now 9 years of age, was reading at peer level and enjoying reading every day, as well as writing. She was fully independent at doing her chores at home. She was well behaved and cooperative in all she did. Sounds no longer bothered her and she enjoyed swimming class with her peers. She no longer stuttered or was repetitive in her speech, and she could converse smoothly and well. Her vocabulary was above age level. She ran 4 km daily, and she joined a gymnastics team, advancing to the highest level rapidly. Recently, Victoria traveled independently with her team to a national competition, where they won top medals. She is in very good health, and she is no longer prone to infections, as she once was.

Last September, Victoria entered school at her age level, and she is doing very well in all aspects of school life. We look forward to Victoria’s full graduation from The Institutes program in the coming year.

“We feel grateful to God, and with a man named Glenn Doman, his family and his admirable staff especially Susan Aisen, because the future for my children is no longer uncertain, and I got to know the intelligence, strength and perseverance of my daughter, she is an example of life, and a teacher for me.”

What advice does Mother have for other mothers whose children are struggling?

“This question moves me to tears, because only we as parents of special children know what we are going through. Living in a world of uncertainty, a cruel society that marginalizes, classifies, and rejects … an uncertain future for our children … Until you get to touch this door called The Institutes for the Achievement of Human Potential, then you start to recover that stolen hope, and your future and that of your children will begin to change. You will give the best effort for them and they for you. You will work overtime but they will be paid with the results you hoped for. Humbly, and with the hand on the heart for the new families that start this, I can say that it will be worth having touched this door.”

Well done to this heroic family. They refused to believe their daughter must live her life never as good as her peers, never achieving her goals or her dreams. Now she is a star and promises to shine on and lead the way for others to follow her outstanding example.

Learn More About the What To Do About Your Brain-Injured Child Course.