A Fighting Chance for Victoria 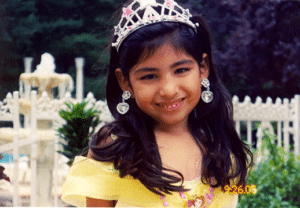 Most of us face major challenges in life as adults, but for Victoria her challenges came early—very early. While most babies are enjoying a good kick or the occasional somersault in utero, Victoria was fighting for her life.

One doctor suggested that I terminate my pregnancy because my child would be a “vegetable”.

Her mother was fighting for Victoria’s life as well. “I was told that my baby would be born dead, or be blind and severely mentally retarded. The chief neonatologist suggested that I terminate my pregnancy because my child would be a “vegetable”. My reaction was shock, fear, dismay, and helplessness. As politely as possible, I walked out of her office without a word,” she explains.

Two months later Victoria was born, not dead, but with scarred retinas. Her mother sought expert advice from two of the most prestigious eye institutes on the East Coast. The prognosis was not good. Victoria was blind and would remain so. They advised her mother to start teaching her Braille as early as possible. Other doctors told her mother that Victoria was severely mentally retarded and deaf, and would be unable to speak. By the time Victoria was two years old, “autism” was added to the list.

Although Victoria had seen many doctors and had a long list of symptoms, there still was no clear diagnosis that made sense to her mother.

“A sense of helplessness, incapacitation and fear”

“Seeing how little progress my daughter made with others was unbearable. The sense of helplessness, incapacitation and fear I felt as a mother was, and is, incredible for the mother of a well child BUT what we, the mothers of a hurt child, feel daily is undeniably the biggest sense of failure any human should ever have to endure.”

Continuing to seek information, she read the book What To Do About Your Brain-injured Child.

“After I read the book I finally understood my child, and I knew I was on the right path. After four years someone had answered for me what mental retardation, blindness, deafness, and autism were. They are all the result of brain injury. I also understood that, as her mother, I could make a difference.”

She enrolled in What To Do About Your Brain-Injured Child Course at The Institutes to learn how she could help Victoria.

A clear path to success

“I learned that every child wants to learn and can learn when the child is taught properly. The tools for doing this were presented in a very clear way that gives parents a path to success.”

At age four before starting The Institutes program, Victoria had a slow reaction to light and her vision was tested at 20/400. She could follow simple one-step instructions and had 150 words of speech. She could walk and run a little, but her feet turned in. Many sounds frightened or upset her, and she was confused and distressed in crowded or noisy places.

It was at this time that Victoria had her first appointment at The Institutes. The staff outlined a comprehensive home program that included an intellectual program with the goal of learning to read; a physical program to improve her vision, balance, and coordination; a physiological program to enhance oxygen to the brain; and a careful nutritional plan to insure that she would be healthy. 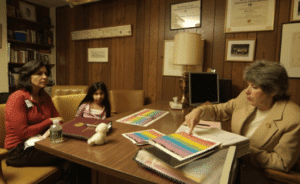 For the next four years Victoria and her mother returned every six months for re-evaluation and to learn a new program.

“The greatest achievement any parent can ever hope to attain”

“To see your child walk upright, hear them say their first word, understand what they really want to say to you, breathe and eat without salivating and to move into intellectual excellence is by far the greatest achievement any parent can ever hope to attain. When I first saw the things the Institutes were doing I was in complete disbelief. Today that disbelief has become a reality which has made our lives so fulfilled.” 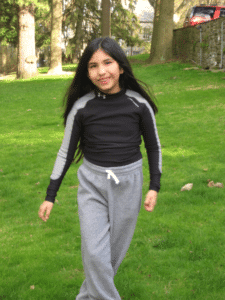 “Victoria could not only read –  she was a speed-reader”

By the time she was eight years old Victoria was a different girl. Mother reports “Her vision was 20/150. Intellectually she could not only read but she was a speed-reader. She read at an adult level with excellent comprehension. She loved reading in English and Spanish and started to learn Italian, French and Latin. In math she completed Algebra II. Physically, she could stand straight and was running 2 miles in less than 30 minutes. She had 1500 words of speech and was able to use the computer to write and express her creativity and her more profound ideas. It was clear that she was a poet, with a profound awareness of the world around her.” 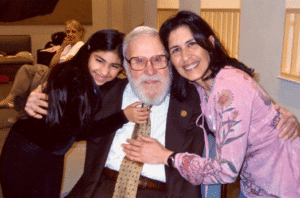 Victoria and Mother have a moment together with Glenn

“I want to help to rescue other children.”

Victoria has worked very hard to achieve these victories, but she insists that it was never too difficult for her. When asked how her program changed her life she writes, “It has made me very intelligent. The most effective part of my program is that it is interesting. It is ever-changing and expanding my mind. It has also made me very optimistic about life. I want to finish the program and, going forward, help to rescue other children.”

Mother’s goals for Victoria? “I am confident that she is well enough to set her own goals and make positive choices. As it stands now, the choice is hers.” 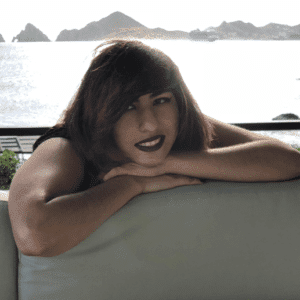 Today Victoria is 18 years old. She has spent her summers attending a performing arts camp. She also attended a Youth Leadership Program every Summer at the University of San Diego.  She also enrolled in Community College and took business courses. She has traveled extensively with her mother gathering 76 stamps in her passport. 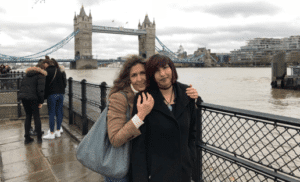 Victoria travels the world with mother

She recently graduated from college preparatory High School where she loved the performing arts especially dance, directing, competitive cheerleading and Tae Kwon Do (she has reached her black belt) 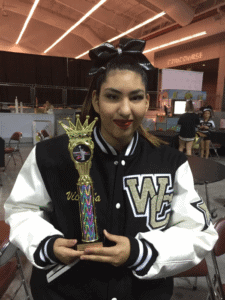 She intends to attend Art School at University this year. This has been interrupted by colleges closing and going online. Art School online is problematical. 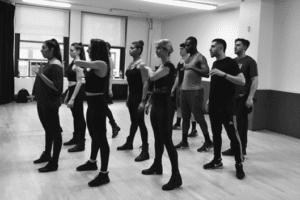 Victoria choreographed 5 dances for her performance in “Quincenera”

Mother’s advice for other parents?

“Don’t inquire about the Institutes….RUN to them with your child and an open mind, ready to work hard and see results! You can spend years in seeking out help from agencies, doctors and pharmacologists that will leave you with years of wasted time. Commit, work hard, learn and have the faith and courage your child needs you to have.” 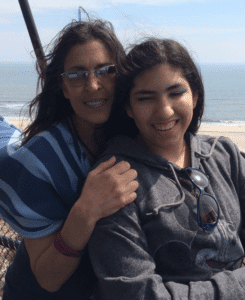 “I am proud to be Victoria’s mother! She is wise beyond her years. At times she is a typical teenager and I laugh at myself when I feel angry with her remembering how this was my wish so long ago…”to have a normal child”. So when adolescence kicks in I get to sit back and laugh a little.”

“Not bad for a child who escaped termination at 6 months of pregnancy, who was supposed to be “a vegetable”, who would never see, talk, walk or be independent. I would say that the most important thing The Institutes gave us was….. the road to defy the odds.”