The Creation of Ability

Is a baby born with certain abilities or can the intelligence and ability of the baby be increased significantly?

It has long been believed that the key milestones in a child’s development are achieved automatically as a result of the child’s growing older over time and or the baby’s genetic make-up.

This theory dictates that the child walks at age one due to a built-in mechanism—rather like an alarm clock set to ring at twelve months and triggers the ability to walk.

Is there a present alarm clock that triggers ability?

How can we explain that thirty percent of the children in our schools will fail to learn to read at age level?

This theory presumes a kind of “readiness.” For example, the alarm clock rings at six years of age and the child has “reading readiness.”

By 1962 The Institutes had taught hundreds of 2,3, and 4-year-old brain-injured children how to read.

If “reading readiness” takes place at six years of age, as the conventional thinking says it does, how can we explain that thirty percent of the children in our schools will fail to learn to read properly by the age of eighteen? Why did their alarm clocks fail to ring at age six? Why has it still not gone off by the time they are eighteen?

Why did our brain-injured children have reading “alarm clocks” that rang early?

It is true that at twelve months of age the average child will walk. But is this a cause-and-effect relationship? Is it the passage of time that has brought about this new ability?

We propose that it is not the passage of time.

After living night and day with well children who were given a superb environment in which to develop from birth, we had to ask ourselves, “Why do they walk and talk and use their hands earlier than their peers?”

Do they all just happen to have better genes? Why do their alarm clocks go off before they are supposed to do so?

Why are they learning earlier?

Providing the opportunity to use a vital reflex from birth: Caleb can hold onto his mother’s thumbs all by himself

Stimulation and opportunity are the basis for brain growth

One of the most exciting discoveries we were to make was that the process of growth and development is a product of the amount of stimulation in the child’s environment. It is not determined by a preset alarm clock or superior genes.

We began to look for every way we could to “set off the alarm clocks” for brain-injured children, and we have found dozens.

We discarded the model of the preset alarm clock. What we had discovered was a simple and elegant truth:

The brain grows by use, not a preset alarm clock.

Brain growth can be speeded by increased stimulation at any point in life, but most especially at those times when the brain is growing fastest: in the first six years of life.

Brain growth can be speeded

The first six years of life are precious because during this time the brain grows at a tremendous rate. Brain growth is most dramatic in the first year.

The development of the newborn’s visual pathway offers clear proof of the dramatic growth of the brain in the first year of life.

A well newborn is, like other little creatures, functionally blind in a practical sense. He can see only light and dark. He has a “light reflex.” This means that if we shine a light into his eyes, the pupil will constrict to prevent too much light from entering the visual pathway. If we turn off the light, the pupil will again dilate to allow an acceptable amount of light to enter his visual pathway.

The significance of gaining the ability to see earlier is far greater. The average baby is trapped in an environment that does not provide appropriate and useful visual stimulation at the very moment when his brain is growing at its fastest rate. He is capable of taking in a tremendous amount of information but his visual pathway is not sufficiently developed to do so.

The more the brain is used the more it grows, and the more capable the baby becomes.

When we stimulate the newborn, he gains the ability to see weeks or even months earlier. This gives the baby the wonderful opportunity to see everything that is around him during the period when his brain is growing very rapidly. 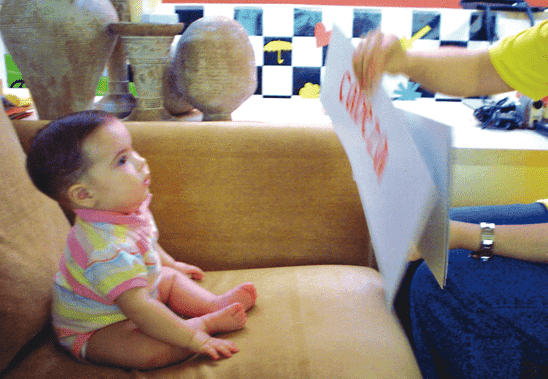 Little Maria is only 10 weeks old and she is already learning to read and loving it!

This visual ability then leads to the maturation of other pathways. Once he can see, he begins to understand more easily what we are saying to him. When he can see space, his need to move is hugely increased. As a result, he tries harder to move and moves more. This movement both stimulates his tactiliity and helps to further develop his vision. His increased movement helps his chest to grow and as a result his respiration improves. This better respiration allows him to make sounds more easily so he can communicate his needs better.

Thus begins a happy cycle of events, each one touching off yet another spark, each spark igniting yet another new ability.

The more the brain is used the more it grows, and the more capable the baby becomes. This is the very definition of using the brain.

This stimulation should be done on purpose, not by accident.

The brain-injured child cannot afford to be stimulated by accident and, in truth, neither should the well newborn baby.

The ability of the child is a product of stimulation and opportunity, not of a preset alarm clock or a predetermined genetic design.