Brain Injury – Microcephaly Can Be Helped! Tim is No Longer Blind, Deaf and Immobile

When Tim was born, he was cyanotic and had trouble breathing. After his birth, he had difficulty feeding and seemed sluggish compared to most newborns. By 9 months of age Tim was delayed compared to other babies. Doctors recommended therapies to speed up his development, which did not yield results. At one year of age, after a vaccination, parents noticed a substantial regression in his abilities. He stopped talking and stopped interacting, and he would tune out as if he were in his own world. He would sit and do nothing. He did not appear to be able to see, hear, or move. A brain injury – microcephaly was given as explanation as to what was happening with Tim. 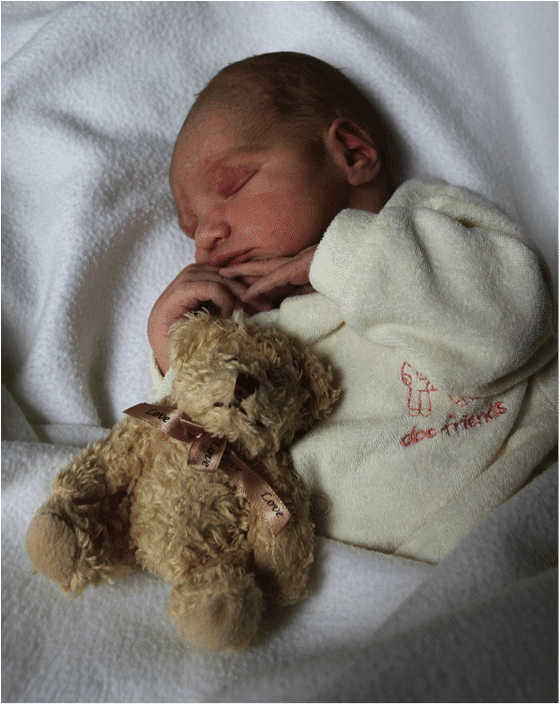 Doctors diagnosed Tim as microcephalic with psychomotor developmental delay due to a hypoxic-ischemic event. Although opinions amongst professionals differed, parents were not given much hope. One professional even proposed that Tim be institutionalized.

Tim’s parents refused to accept this fate for their boy. When Tim was 3 years old, his parents learned about The Institutes and attended the “What To Do About Your Brain-Injured Child” Course. At that time, Tim could not see, hear, move or make any sounds other than cry. He was functioning at the newborn level in just about every area. 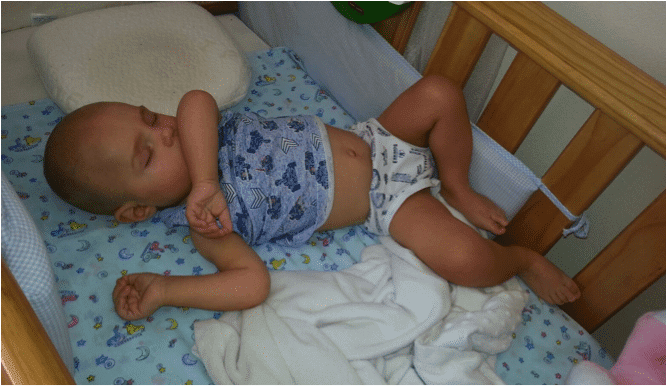 Parents wasted no time in beginning the program they learned in the course. They started an intensive program of sensory stimulation to get him seeing and hearing well. This included plenty of visual and auditory stimulation daily. 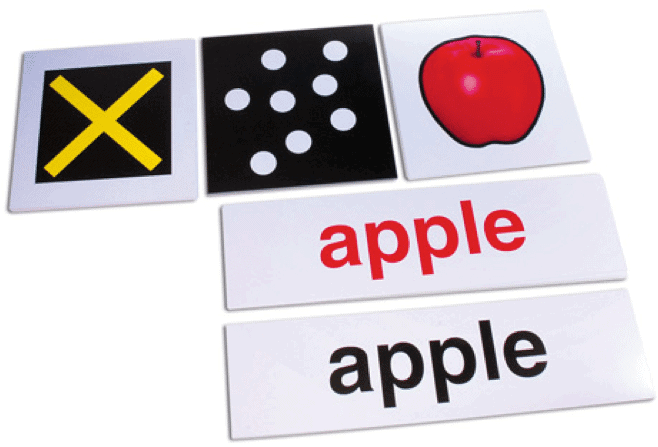 Parents used bold images and words to stimulate his vision.

Parents also introduced the Inclined Floor to get Tim crawling on his belly. Within two weeks of starting the Inclined Floor, Tim began to crawl on the flat floor. Over the next ten months, Tim began to make changes that were not deemed possible before. By the time parents brought Tim to The Institutes for his first evaluation, Tim could see very well. He could recognize the pictures and words parents had shown him on his program. His “brain injury – microcephaly” diagnosis that once seemed hopeless was turning around. 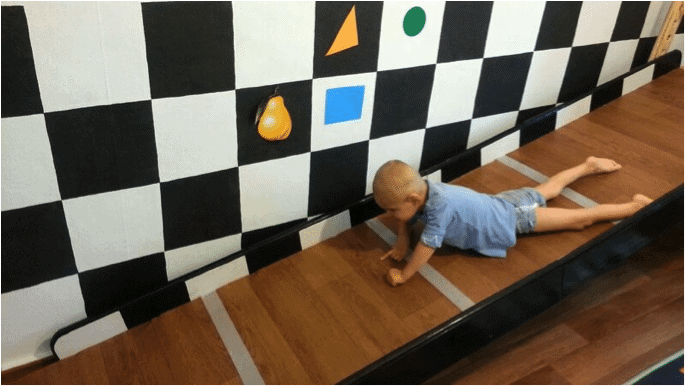 Tim crawling down the Inclined Floor – the contrast of the black and white checkboard environment was essential for his visual development.

He could hear for the first time in his life, and parents were certain that Tim could understand speech. He began to make sounds for the first time and even began to use his hands to grab objects, which he had never done before. He learned to crawl and worked up to crawling 100 meters daily before he started to creep. He was now starting to creep to get around his house. 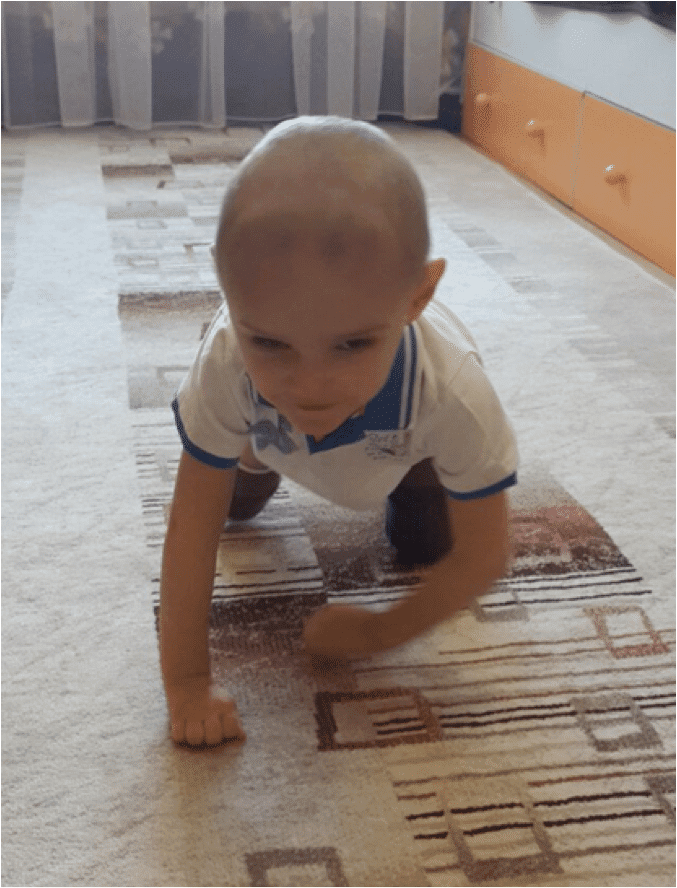 No longer immobile – Tim starts to creep on his hands and knees.

It has been a year since Tim came for his first evaluation at The Institutes. In the last year, Tim has continued to make incredible gains. He not only reads, but also loves to read homemade books that his parents make for him. His parents no longer have to read books to him – he is able to read them independently. He is very clever and parents report that he only needs to be taught something once in his intelligence program before he knows it. His understanding has greatly improved – he understands nearly 2,000 words and can follow instructions. He loves to learn new things. 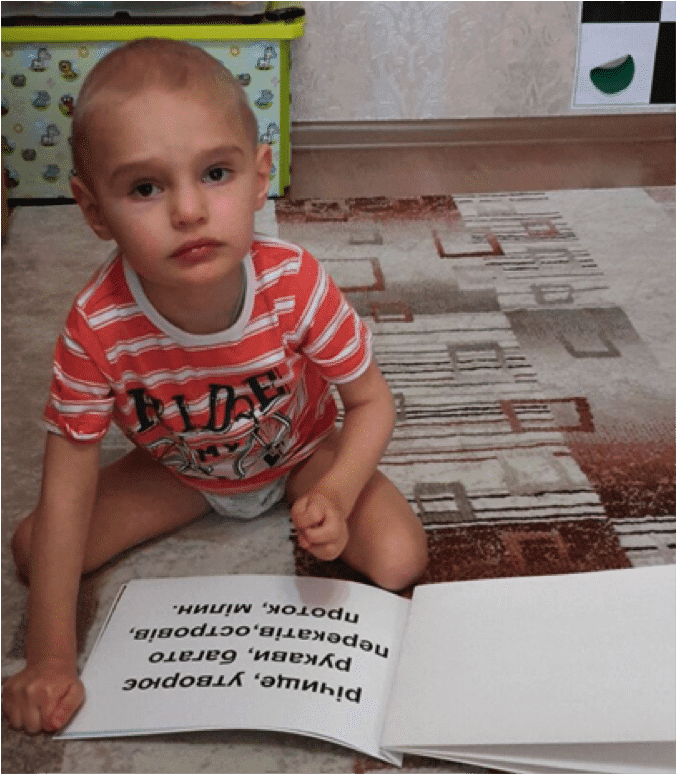 Tim enjoys one of the homemade books that his parents made for him.

He continues to creep daily as part of his program and has reached 1600 meters (one mile) of creeping. He has learned how to stand against the wall and cruise along furniture.

Tim is learning to walk with the overhead ladder. Parents and the staff know their next goal – to get Tim to walk independently. They know they are getting closer and closer each day. 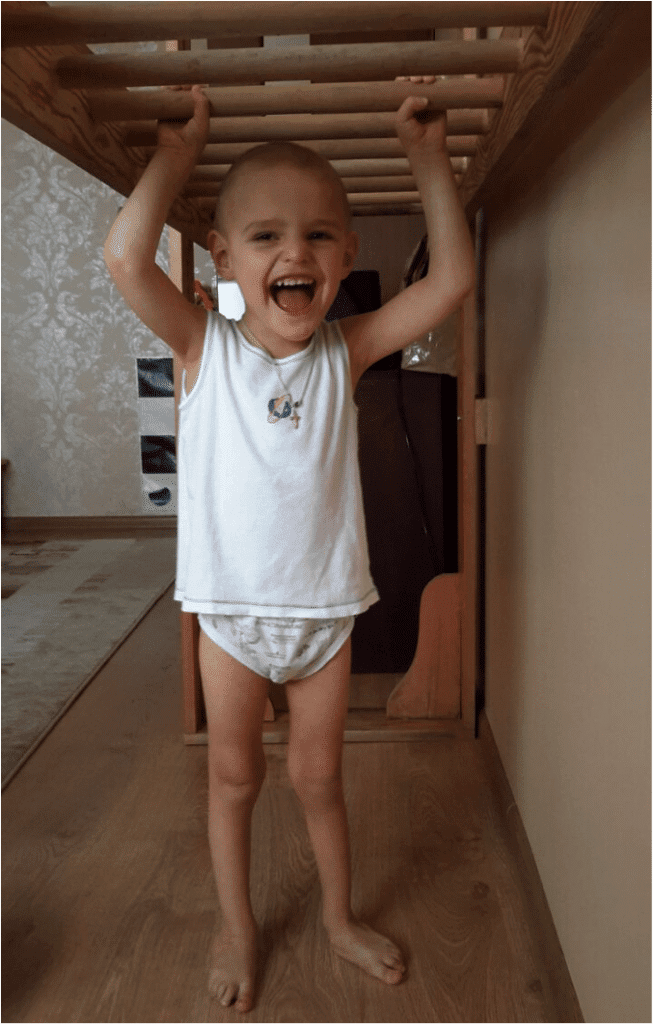 The overhead ladder is essential for Tim to learn how to walk.

In the past 6 months, Tim has started to say his first words. The boy who was blind and deaf can now answer questions with “yes” or “no”.

The child who was once immobile is up on his feet and learning to walk. Tim and his family still have a lot of work to do, and they are working day in and day out to get there. We hear daily on the news about microcephaly because of the spread of Zika virus and the suspected connection between this virus and babies being born with a brain injury – microcephaly. Often these reports include statements that children with microcephaly cannot be treated or helped.

Little Tim is now a totally different child. With continued hard work and the dedication of his parents, we are sure that he will continue to impress and inspire everyone who knows him with his achievements – and we hope change the notion that children with microcephaly cannot be helped.