Dx Autism Spectrum: Mateo and His Family Choose a Pathway to Wellness

Mother tells the story of her son

Mateo was born vía C-Section at 37 weeks. The baby developed normally reaching milestones until the age of nine months. But then, Mateo lost all meaningful sounds and made no eye contact. Assuming every kid develops at a different pace, and getting no feedback regarding this from his pediatrician, my husband and I decided to let time do its job.

By the age of 18 months, crowds overwhelmed Mateo, he had no words of speech, he did not respond to his name, he made no eye contact and he developed repetitive movements.

We decided to enroll Mateo in pre-K and find out if these symptoms were only a matter of lack of stimulation, or if what we had started to suspect, was true. All symptoms pointed to the autism spectrum, but still no red flags were raised from Mateo´s pediatrician.

Mateo enrolled in school at the age of 23 months, and in his teacher´s eyes, Mateo´s developmental delay was very obvious. They suggested an audiogram to ensure his auditory pathway was developing properly, as Mateo did not respond when he was called, and he was unable to understand or follow simple instructions. He spent most of the time on the floor, was unable to focus, he did not relate with his peers and he still had not developed any speech.

One of Mateo´s teachers kept mentioning the benefits of “The Philadelphia Method”, but we really never took the time to understand it.

When the audiogram was done, and everything turned out fine, then his pediatrician referred us to a neurologist.

He asked us to get an MRI as well as an electroencephalogram. Both turned out fine too. At that time, the neurologist diagnosed our son with speech delay and medicated him. We saught the advice of two pediatricians and both agreed to continue with the medication, so we did.

Mateo was put on two medications that would supposedly help him with speech development and improve his ability to focus. He stayed on these medications for six months but there was no result.

Mateo started banging his head against the wall until he bled, his temper trantrums were out of control

Still at the age of 30 months, Mateo had no speech, no comprehension at all, was unable to follow simple instructions, he could not hold things in his hands (he dropped them immediately), the repetitive movements continued and increased, he started banging his head against the wall until he bled, temper trantrums were out of control, he did not clap, dance or point his finger, still no eye contact had developed and he started aligning all objects. Physically, Mateo was very weak, he could not go up or down the stairs, he could not walk long distances, or run at all. He was unable to jump or hop. He did not have a social smile, lacked of interaction even with his family, and showed no interest in anything but staring at spinning objects. Shampooing his hair was the hardest job, due to his hypersensitivity. Mateo did not react to loud sounds, even though he could certainly hear the “click” of a remote control.

As we continued with the treament given by the neurologist, we consulted with psychologists, pedagogues and specialists in the “autism spectrum”. All they said was that his “autistic” behavior could possibly be immaturity and to wait for at least six months attending therapies.

At 30 months of age Mateo started conventional therapies, such as: speech therapy, occupational therapy and behavioral therapy. We never missed one, and we worked at home exactly as the therapists recommended. For six months, we stuck to their methods and suggestions with no improvements.

In a period of seven months, Mateo changed schools three times. Something was not working and we needed some other kind of intervention.

We remembered the “The Philadelphia Method” and in our search we found the place.

We read so many testimonials, but the one that caught us was from a six-year-old named Alex Marquez.

We contacted The Institutes for the Achievement of Human Potential in April to sign up for their “What To Do About Your Brain-injured Child” course scheduled in August in our home country of Mexico.

We were convinced this was the path we wanted to walk; our pathway to wellness.

After this life-changing course, some important decisions were made at home. Starting from an impeccable nutritional intervention all the way to one of the most difficult and criticized decisions: pulling our kid out of school. But we were convinced this was the path we wanted to walk; our pathway to wellness.

When we went back to our hometown after the What To Do About Your Brain-injured Child course, the specialist we had been seeing for therapy finally submitted her diagnosis: our son was on the “autism spectrum”.

Our expectations and dreams did not vanished. We had a plan.

We immediately dropped the therapies and started working on our home program from August to December. The course taught us how to create a neurological profile for our son and empowered us to design a program to tackle all symptoms at home

With nutritional intervention, speech started coming within a week. Mateo started counting from 1-10 and said the vowels. He surprised us by arranging the ABC magnets on the fridge in perfect order and showed us he could count up to twenty. There was a lot of information in his brain, but he had not been able to express until we changed his diet.

Language increased, his repetitive movements almost stopped completely and he did not bang his head on the wall anymore

We started our Reading Program and more vocabulary started coming… we moved from only two words of speech in August to almost twenty words in December. Crawling, creeping, and patterning were part of our daily activities. Mateo´s repetitive movements had almost stopped completely and he did not bang his head on the wall anymore since then.

My husband and I scheduled our first visit to The Institutes in December for the Aspirant Program and we attended Lecture Series II. Our initial functional diagnosis was a Severe, Diffuse, Bilateral, Cortical and Midbrain Injury. With a chronological age of 36 months, and a neurological age of 11 months at his first evaluation our son had moved neurologically from 11 to 17 months neurologically as a result of our 4-month home program.

From December to May we attended Lecture Series III and worked towards new objectives, achieving Language and Reading Victories. Mateo had been walking up to 2 km non stop on a daily basis. We were formally accepted in the Intensive Treatment Program.

From May to November, Mateo´s biggest gain was in behavior. He started following instructions, he read over 180 homemade books and had seen over 500 Bits of Intelligence. He started a math program and physically he´s getting stronger. Mateo achieved Understanding and Health victories during this visit, and also started speaking in longer phrases. His evaluation indicated a growth rate of 127%. Attending Lecture Series IV during this visit, was just like on every visit, the most wonderful, enriching and empowering experience.

Mateo is currently working to become an independent reader and brachiator. He´s following a math program and loves to work on bits of intelligence. Intellectually, he is well above average kids his age, mastering topics such as: flags of the world, arts, musicians, paintings, creatures of the sea, maps and many others. He has also started reading books in English and is now able to follow instructions in English too.

Mateo is also working to get a running victory in our next visit. His tactile hypersensitivity improved considerably, and is now able to wear hats, sunglasses and any kind of fabric. Washing his hair is not difficult anymore. His auditory pathway has made so much improvement, and now reacts appropriately to threatening sounds. He also responds to his name when he is called.

Mateo has become very affectionate and loves to hug and kiss his family and friends. He likes to sing and recently developed his ability to jump. He is also becoming more independent, and some of his responsibilities are to brush his teeth, to put his clothes on and to clean his working area.

Mateo has an 18-month old sister, Sofía, who shadows Mateo´s physical program and is now able to do perfect log rolls, she is in the process of mastering forward rolls, she can hang from a dowel for 17 seconds and recently started a Reading Program.

As a family, it is our desire and life project to develop our children´s neurological and physical capabilities to their full potential. We have found at The Institutes, the method, the direction, the support and the experience of the staff to overcome our son´s brain injury and to graduate him to life.

Just like Glenn used to say, “When in doubt, bet on your kid. You will always be a winner and, even more important, so will he.” 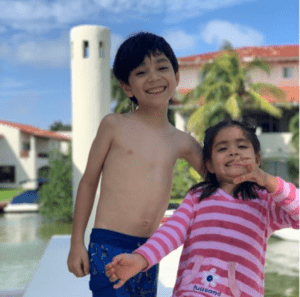 Mateo and little sister today: He is a great older brother setting an example and leading the way.

Today at age seven, Mateo is in elementary school and is an outstanding student in reading, (both Spanish and English) and math. He loves learning, his favorite subjects are Geography and Natural Science. He loves to swim, bike, and run, and is physically very fit. He continues to be in excellent health, and lead the way for his little sister, at four, she follows her big brother like a shadow and now she is excelling, too!