Results: The only thing that matters in the world of hurt kids

At birth a newborn baby is immobile: the baby can move his arms and legs freely but cannot move forward. This is the first stage and at this point the baby is essentially immobile. 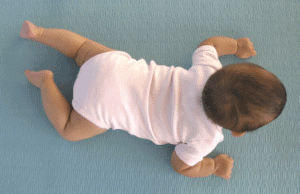 A newborn baby needs a user-friendly floor environment that makes it easy to move.

As the baby has more opportunity on his belly on the floor the baby moves his arms and legs more. The more he does so, the better he gets. He is makes many experiments to discover what he needs to do in order to move forward. At first, he may actually move backwards or pivot around. Although this may appear to be frustrating for him, this is progress.

When a baby begins to actually move forward this is the beginning of crawling and it is a very important stage in the baby’s development.

Injury to the brain either before, during or after delivery can result in immobility or paralysis. This is because of injury to the motor pathway not injury to the arms and legs. 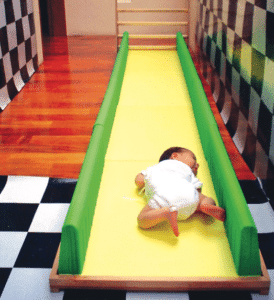 A baby crawling track is a user friendly floor environment. After opportunity in the track, the newborn baby is crawling in a matter of days.

Appropriate sensory stimulation and motor opportunity are the answer when the motor pathway is in trouble. When the child is provided with appropriate sensory stimulation with increased frequency, intensity and duration in recognition of the orderly way in which the brain develops and then given ample opportunity to move, that pathway will grow. The child will begin to move a few inches, and then a few feet, and then use crawling as the means of transportation from place to place. Once a child can crawl across a room he is no longer immobile. 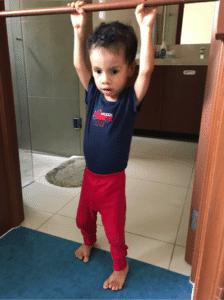 Diego no longer crawls for transport, now he is is walking independently.

Diego was diagnosed with the genetic disorder, Trisomy 8. He was 11 months when he started the program. He had restricted movement of his arms and legs due to rigidity. After being given daily stimulation and opportunity to move he learned how to crawl for his own needs after fourteen months. He crawled at least 160 meters in a day. Today Diego not only creeps more than a thousand meters daily on his hands and knees, he is walking independently. 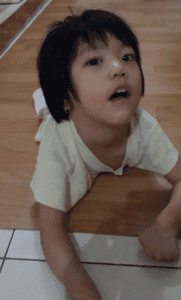 Beatriz began the program when she was 22 months old. She could move her arms and legs, and she could rolled over when placed on the floor but she could not move forward or backward. She was given daily opportunity to move down an inclined floor and 11 months later she was crawling 200 meters daily. She has now doubled that distance. 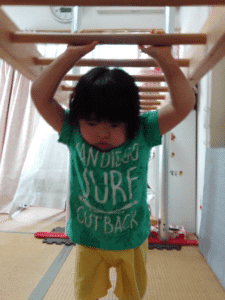 When Yukia began the program she was 40 months old. She could move her arms and legs but could not move forward on the floor. A year and a half later, after daily opportunity on the floor, she learned how to crawl 50 meters in a day. She could crawl 20 meters non-stop. Now she can crawl 100 meters daily.

Each of these children were immobile. Sometimes parents are told when they have an immobile child that this cannot be changed and it may be permanent. Now each of these children can move and explore the world around them and enjoy that world. The quality of their lives has changed immeasurably for the better. These results were brought about by the efforts of each family. Mother and Father, brothers and sisters and the child – all working together to give each child a fighting chance for a much better life. 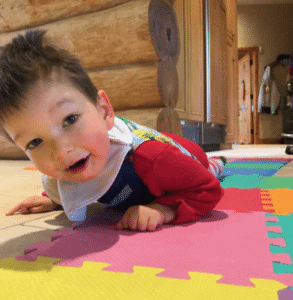 Shortly after he was born Jerome was diagnosed as microcephalic. He started a careful program of stimulation and opportunity at 28 months. At that time he was rigid and could not move forward on the floor. Six months after beginning his home program, he began crawling. Three months later, he was crawling more than 100 meters a day. At that time he was awarded a crawling victory. Today he  can maintain himself  on his hands and knees and he is beginning to creep. 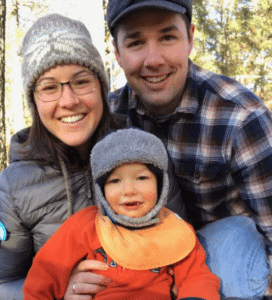 Jerome today with his team, Mother and Father 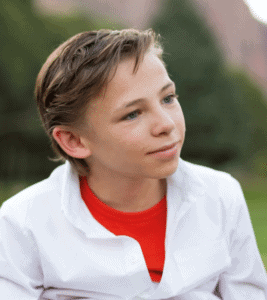 When Sebastian was 5 years old, he had severe nerve pain and was diagnosed with Gullian-Barre syndrome. He then had a severe reaction to the medication used to treat him. This caused hydrocephaly. He lost all his mobility function.

He began on a home treatment program at age 10. At that time he could only move forward using the trunk of his body. It took him 10 minutes to move 4 meters on his belly on the floor. The left side of his body was tighter than the right side of his body, especially his left arm and fingers. He started on a full program of stimulation and opportunity. After 12 months Sebastian was able to crawl 330 meters in day for the first time since he was injured at age five.  Today he can get on his hands and knees and he can stand with overhead bar for the first time. 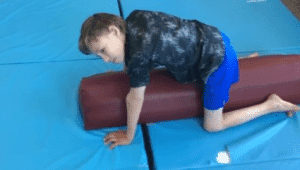 Fighting his way back 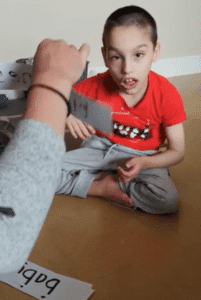 Cillian gets a reading and a crawling victory

Cillian was two months premature. He was a one of twins and his weight at birth was only 1,000 gm. He had  Grade 1 intraventricular hemorrhage. When he was five and a half his parents discovered the program of The Institutes and he began on a home program. At that time he was immobile. Cillian could move his arms and legs, but he could not move forward to crawl. Six months later he began to move forward on the floor for the first time. At his first appointment at age six he could crawl 90 meters a day. He also began reading for the first time and has achieved a reading victory. Now he crawls 200 meters a day. 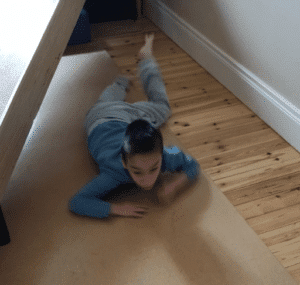 Still a long journey but no longer immobile

Each of these children were immobile. Sometimes our parents are told when they have an immobile child that this cannot be changed and it may be permanent. Now each of these children can move and explore the world around them and enjoy that world. The quality of their lives has changed immeasurably for the better. These results were brought about by the efforts of each family. Mother and Father, brothers and sisters and most especially the child – all working together to give each child a fighting chance for a much better life.