Diego was delivered by C-section. He hardly cried at birth and was cyanotic and had seizures. He was given oxygen for first 12 days of life. Since he could not breastfeed, he had to be tube fed.

“When Diego was born, the doctors told us right away that he had a disability. The minute I found that my son wasn’t like a normal kid I couldn’t believe it, I got desperate and really depressed, I wanted to die. It was really hard for me as a mother.”

Doctors told Diego’s parents that he had a severe disability and would not develop like normal children. Tests done revealed that Diego had Cerebral Palsy, Agenesis of Corpus Callosum, and Mosaic Trisomy 8. He was started on medications at birth.

Parents were dismayed, they could not believe that their tiny baby had so many problems. What could they do?

When they brought their baby home, they decided to look for answers to the overwhelming problems that their son’s Doctors had presented to them.

After the course Mother remembers, “We should begin as soon as possible so that our son can improve the odds to have a better life”

They learned about the work of The Institutes when Diego was 10 months old. They immediately enrolled in the What To Do About Your Brain-Injured Child. The course gave them a different picture of the future for their baby. Mother remembers thinking “We should begin stimulating Diego as soon as possible so that our son can become very intelligent and can improve the odds to have a better life.”

When he was 19 months old, he was first evaluated at The Institutes. At that time Diego was unable to his converge vision, but he was able to differentiate pictures. He had a persistent startle reflex and was hypersensitive to loud sounds and hyposensitive to touch. He was very uncomfortable in crowded places and only understood two words of speech. He was able to move his arms and legs, but he could not crawl on his belly yet. He had a limited range of meaningful sounds and was unable to pick up objects.

Parents began on a home program designed to give Diego the sensory stimulation that was appropriate for him and the motor opportunity to use that stimulation successfully. His program was a careful balance of visual, auditory and tactile stimulation with ample opportunity for mobility, language development and manual competence. He started on an early reading program and a very careful nutritional program.

Diego begins to crawl and creep

He can now read and his understanding is at least as good as a well three-year-old if not better.

Today at age three Diego’s ability to converge has improved greatly. He has seen almost 300 homemade books as a part of his Reading Program. The content of these books is well above his age level.

Diego’s general knowledge is enhanced and expanded with a program of encyclopedic knowledge. He learns about the world around him – birds, mammals, insects, anatomy, works of art. Even at his young age he is interested in a wide range of topics. In everyday life, he understands the instructions and explanations given to him by his parents. His parents estimate he understands at or above his age level.

His tactile ability has greatly improved. Diego is physically much stronger now – he crawls and creeps for transport. He understands well what is going on around him and, as a result, he easily intuits what to do next. His language development, which was behind his peers, is now catching up. He repeats words said by those around him and uses a half-dozen words spontaneously to express his ideas and opinions. He can now pick up objects easily and he has cortical opposition in both hands.

The next step for Diego was to walk under an overhead ladder independently, and then to walk away from the ladder, which he did!

Diego is on his feet and headed toward independence 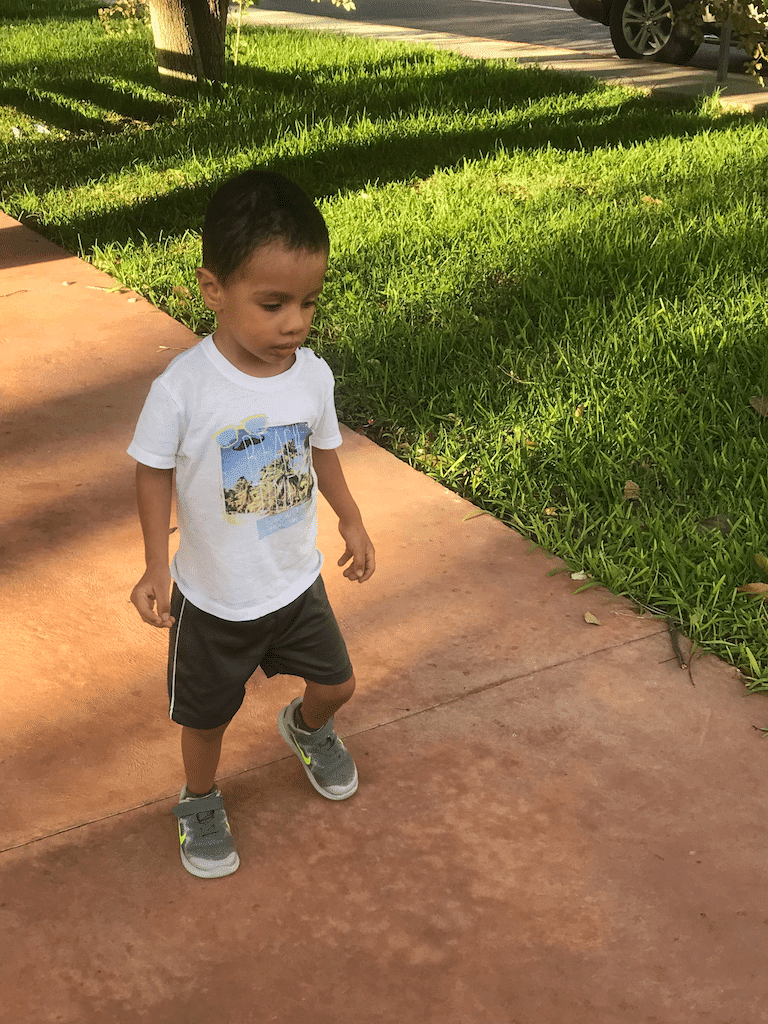 At three years of age, Diego began walking almost a mile a day, and on the beach, too.

Diego walks to ride his tricycle, and have even more fun!

When asked what advice Diego’s parents had for parents wishing to enroll in the What To Do About Your Brain-Injured course, they responded:

“Do not get depressed. Before starting the program, get well organized. You should not have any doubt about the success of the program; you are on the right path.”

Agenesis of Corpus Callosum, Mosaic Trisomy 8, and Cerebral Palsy were diagnosed shortly after birth. Diego is still not walking or talking as well as his peers but he is on his way. He is reading and understanding considerably better than other kids his age and it does not look like his peers are in danger of catching up right now.

He has begun on his own pathway to wellness and his journey will be unique – as it is with every child we see. There is no doubt that his family is rewriting the story of his life and his own hard work and determination are a big part of that story.

Keep fighting Diego – carve a new path that will inspire parents and their children to follow you.